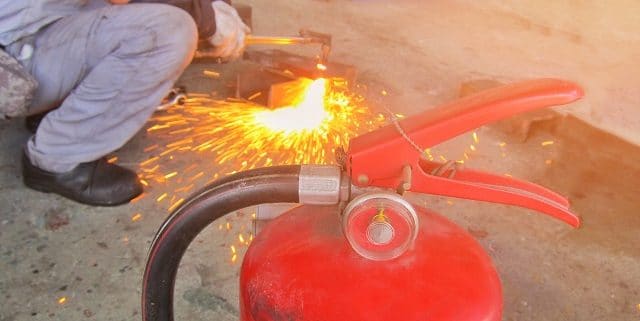 Once working as a second year welder I picked up a quick gig at a lumber mill shut down, doing maintenance welds. Obviously welding and a place covered in wood is an incident waiting to happen. We did all the appropriate permits and lockouts etc; but when it came to a fire watch, I got the short stick. The worker that was to be my watch decided that he was going to get double time to sleep in his truck. So he would place the fire hose close by and off he would go. I was still pretty green (a brand new second year) and too scared to voice my concern. So I struck an arc and did my job. Well until I had to stop to go put out some small fires. Yes I’m serious! This really happened. Think about that… It was a lumber mill people! The whole thing could have gone up in flames. There are so many things wrong with what happened that day. No fire watch meant no pre-work inspections, no one to extinguish it, pull the alarm or call for emergency services if it did get out of hand. To top it off, I was left alone. Let me tell you… I found my voice at the end of that day and got a new watch the next day. That’s why there is training for fire watch, so you know what steps to take to mitigate the hazards as much as possible.

The responsibilities of the fire watch include, keeping a lookout for the hazards, potential fires and fires, extinguishing fires, following procedures if a fire occurs (pulling the alarm or calling emergency crew, your permit will outline this), following the permit, doing  pre-work inspections on all fire fighting equipment (makes sure it’s in good working order and tags are up to date), doing a final inspection at day’s end to make sure nothing is burning or could lead to a fire, stay in communication with other workers at all times and never leave your station unless you get an equally trained worker to take over for you.

Being a fire watch doesn’t mean you get a day off of “real” work. There are huge responsibilities that come with the task. Take it seriously, people are counting on you.

New on the Job