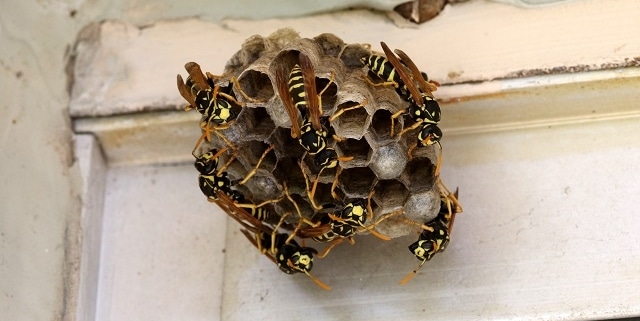 I feel like there is a lot more bark than bite (or should I say sting) when it comes to bees and wasps. The buzz around these tiny little insects is more of a hazard than the sting itself. According to the Montreal Gazette, roughly 40 Canadians die each year from contact with bees or wasps, that’s the same amount of people that die from being struck by lightning every year. I am in no way trying to diminish the seriousness of bee and wasp stings, especially for those who have allergies; I’m trying to point out that the panic that comes over most of us when we get stung or even see a bee is also a major hazard. Someone could fall off a ledge or ladder while flailing around at the sight of a bee.  What about inside motor vehicles? How many drivers have had close calls because they’ve been waving their arms wildly to avoid, or remove, a wasp that’s found its way in through an open window? What about being struck by heavy equipment while out running one of these little guys? The list goes on. So, try and keep your cool. Unless you have a serious allergy, the sting may not be as big a hazard as say… getting hit by a piece of heavy equipment.

For most people, a sting consists of some pain, swelling, and redness. This is definitely no fun, but it beats getting run over by a forklift. Now, if you or a coworker does get stung, be on the lookout for an allergic reaction, which can include difficulty breathing. If a serious reaction is manifesting, call for an emergency crew straight away. If you or your coworker is anaphylactic, you should be carrying an EpiPen with you at all times. If there is no allergy, just remove the stinger and put some ice on it; you’ll be fine. Try and avoid work anywhere near a nest or hive if you have an allergy. Always do a quick walk-around of your work area to ensure there are no surprise bee hives down the road and keep covered with long pants and sleeves.

For those who have allergies to bees, always, always carry your EpiPen. If you have never been stung, be aware that there is a small chance you do have an allergy. For everyone else…try and stay calm.  Remember, the hazard of trying to get away from a bee or a wasp could be greater than a sting.